You are here: Home / GM / How to Stop a Murderhobo from Ruining Your Game

A good campaign leads to adventure. Adventure can lead to killing. But it doesn’t always have to. Some of your players may not realize this, which leads to them becoming a murderhobo. But what exactly is a murderhobo, and how do you keep them from derailing your game? 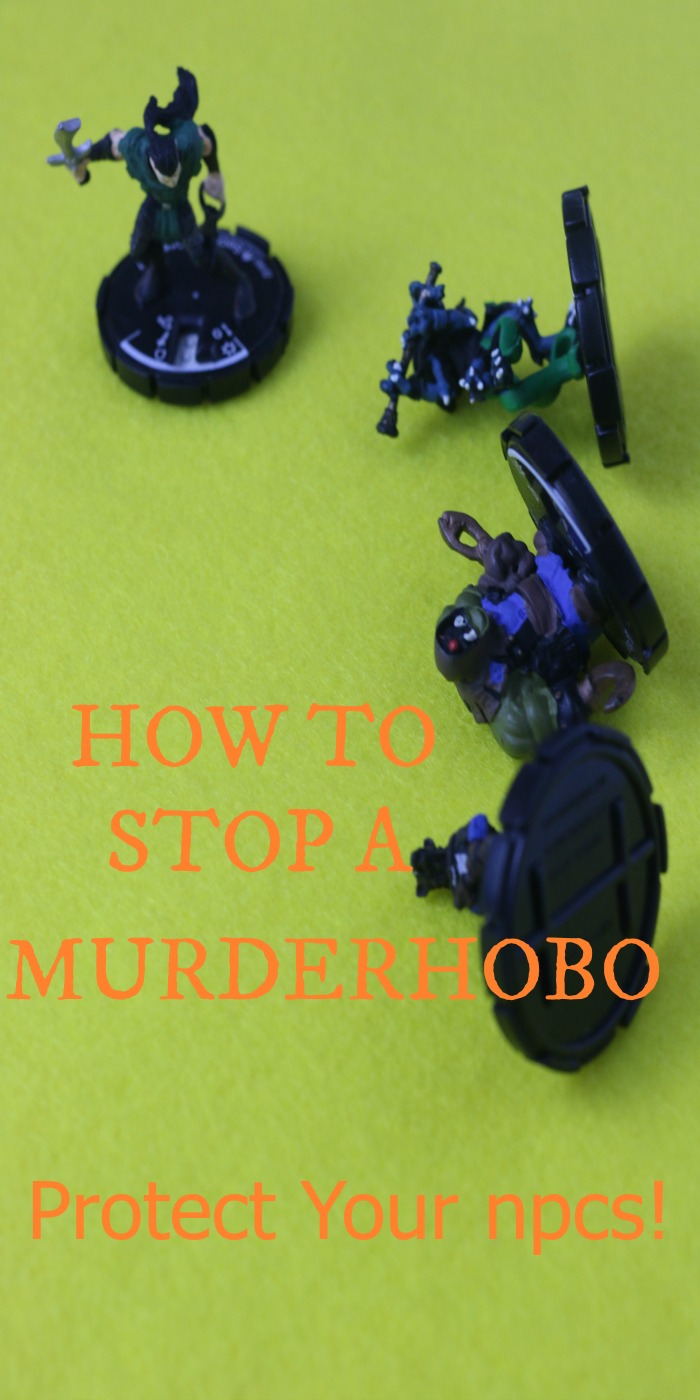 The term “murderhobo” is one that has come to be known to many GM’s, much to their dismay. A murderhobo is a player character that will kill anything that moves for their own benefit. Whether that benefit is monetary, or just for fun they will disregard the normal rules of society and kill with reckless abandon.

Is that really a bad thing though? A lot of games require you to kill to proceed, so why are tabletop rpg’s different? If one player is killing everything before they have a chance to speak, well then they can’t speak. Without the power of speech to further your plot, your story will become a dull gauntlet of whatever challenge you can throw at them. Sure it’s fun for a while, but it gets old quick and it doesn’t leave room for much character development. By removing murderhobo tendencies you are preserving the role playing part of your role playing game.

So let’s talk about how to break the habits of a murderhobo. This can be done in several ways depending on the degree that your player lets out the killer inside. The most direct way is with a straight answer of no; No you cannot kill this person. It’s a little ham-fisted, but in cases where it needs to be stopped immediately it might have to be done. Remember to always put the enjoyment of the group over one individual. You’re all there to have a fun time.

A smoother way to eliminate murderous tendencies without harming the feelings of your players is by teaching them consequences. A lot of murder hobos are players that are just coming off of video games. More often than not these games reward killing targets while minimizing consequences of killing innocent npcs, even in open ended games with a law system. This doesn’t create too many problems in those games, but in your game that innocent life could’ve been the key to advancing the story. So to teach our players not to kill everything in sight, we have to show them that there are consequences. These consequences can come in the form of law enforcement, revenge, or empathy.

Law enforcement is as simple as it sounds: killing is breaking the law, and so a killer will be sent to jail. In a game that frees your playstyle, the last thing you want is to be hindered. Once your player realizes that killing may end the fun, they might pull back a bit on it. If this isn’t the case, then you can move on to revenge.

The people that get killed may have families, and those family members will not be happy to hear that their loved one was another notch in a killer’s belt. Some may be so unhappy in fact that they will do something about it. By sending one of the slain’s family members out on a quest for vengeance you show your player that the people of your world are real, in a sense. They have ties to other people, and those ties can be strong enough to send opposition if messed with. This is also taking something bad and using it for good by adding excitement to your games.

If the avenger fails and your player is still happily lopping off heads, then you can try to appeal to their empathy. Leave mementos of the fallen where your player will find them. Show them that their actions have left behind a trail of grief. The player may the come to their senses and realize that not every problem needs to be solved with a sword.

Murderhobos can grow out of hand very quickly. If left unchecked, they may even murder your campaign! By nipping the problem in the bud you can ensure that everyone has a good time with your game. This also helps your players learn to enjoy the nuances of the game. Their role playing will become better and they will become a better player as a result. This is a difficult issue to handle, but it’s one that needs to be addressed directly. It’s one of the harder GM responsibilities, but you have to keep the table at peace.

If these methods prove to be ineffective, you may have to take the conversation away from the table. Take your trouble player away from the table and talk to them. Explain that their actions are affecting the fun that the other players are trying to have. Once the issue is sorted out, everyone can have a fun time in your game. And while they’re doing so, make sure to keep those dice rolling high!