You are here: Home / Player / Character Quirks: a Dash of Flavor 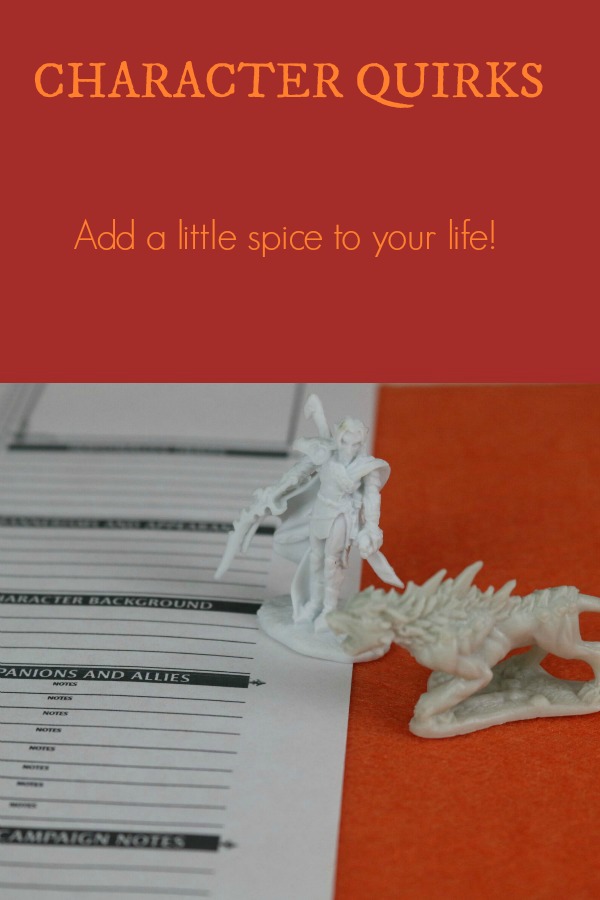 If flavoring your character helps make them unique, then character quirks are just a dash more flavor that makes then remarkable.  Character quirks can run the whole spectrum; from good to bad, and small to all encompassing. How you want your quirk to affect your character is up to you. Generally speaking, small quirks come up more frequently but don’t change the game too drastically. If you pick a small quirk don’t expect it to make or break a game. Bigger quirks tend to only pop up occasionally, as bringing them up too often may impede the game. Remember that you’re not the only one playing. Big quirks, when they do show up, can be big focal points for the game as well as the character. No matter what size your quirk is, keep in mind that it should mostly affect your character, not necessarily the game.

The second half of the quirk equation is how you want it to affect your character. A positive quirk is something that adds to your character, like a unique piece of equipment, or a birthright. These quirks build up a character and tend to be their defining feature. On the flip side of the coin we have negative quirks. These traits hinder a character, but that character inspires to persevere despite it. They will struggle to overcome these traits, whether it be a fear or something far worse. But the character will be remembered for his victories against these struggles.

Every real person has good and bad points to them, and adding some to your character will not only make them feel more realistic, but it will also make them memorable. By adding character quirks, you make a character more fun to play as and play with. And while you’re playing with your quirky character, be sure to keep those dice rolling high!