You are here: Home / GM / The Start of an Adventure: How to Begin your Campaign

First impressions are important. The feeling you get from a person the first time you meet them usually dictates how the relationship between you two plays out. The same can be said for players and their GM. The first game in a campaign should set the tone of the rest of the games. If the first impression that your players get from this game isn’t right, it could cause your players to shy away from the game altogether. So how do we avoid this and give them a great game straight out of the gate? To answer this, we must break down the essentials of a story’s beginning. 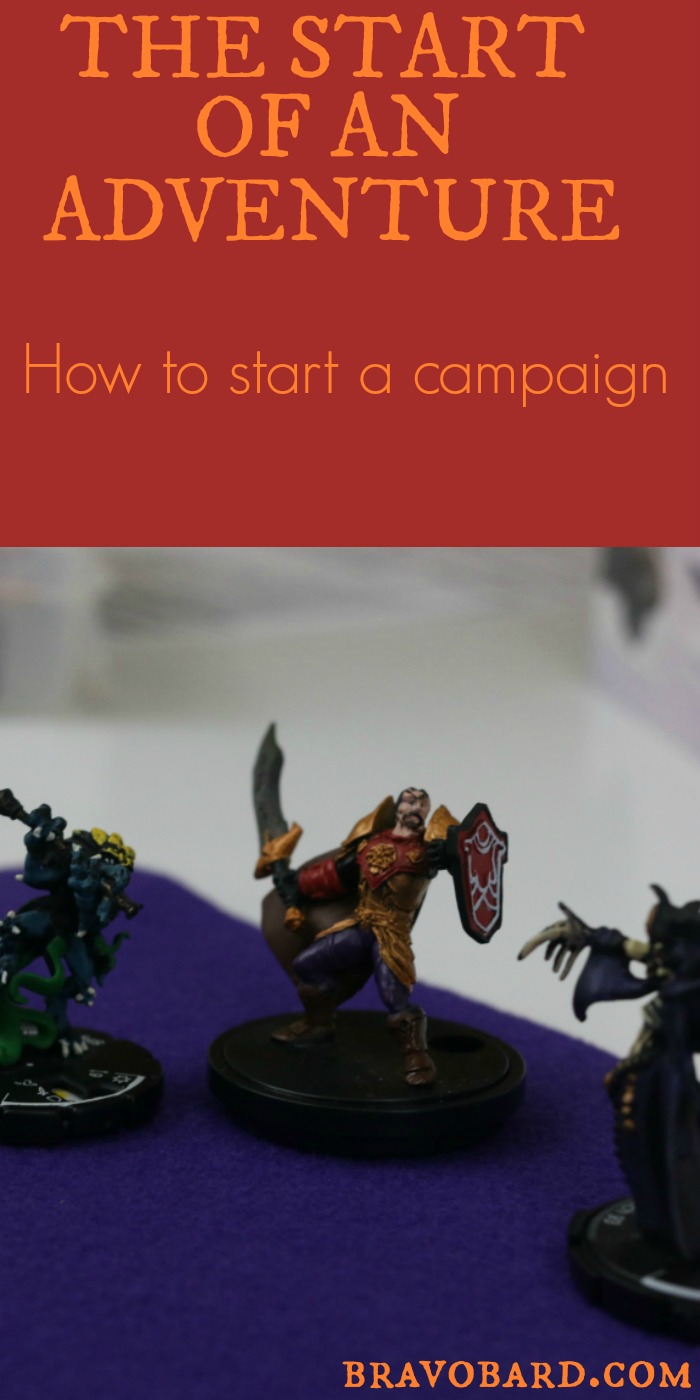 We’ve all heard it in an english class before: every story has a beginning, climax, and resolution. Expanding on this, a story can actually have more than one climax. You can put these climaxes anywhere in your story, like the beginning. If you really want to drum up excitement quick you can throw your players right into the thick of things. The town they all live in might be under attack, or the local citizens may be holding a festival. This gives your players something in common to experience and overcome. But maybe that’s not your style. Perhaps you enjoy a slow burn to your story, building up into one white hot inferno of a climax. This can work even better if you have experienced players. The only issue with this approach is how do you get your players into the same party.

At the center of every tabletop game there is a party. A group of adventurers who band together to overcome obstacles and progress the story. When you start you will have the adventurers already. All you need is to band them together. This can be one of the toughest things to do naturally. The hardest part is making your players believe it is their idea to form a party. After all, why would several individuals who hadn’t known each other up until the start of your game be willing to join together? Well as a GM, it is your job to give them that reason. As I’ve said before, the easiest way is to start your game with something to overcome. If your players all have a common enemy, then at least they have something in common. Perhaps they’re all trying to escape from something. Whatever the conflict is, make all of your players face it. It may be death defying, but it bonds them together.

The not so easy way of starting a campaign, the slow burner, makes forming your adventuring party a tad more complicated. You’re going to have to peruse through their backstories for a common line. Perhaps the players all share a family friend that calls on them for help. Maybe a relative of one player needs help from another player. Maybe your players are each looking for someone. And perhaps that someone is tied to your big bad evil guy. The benefit to this bond is that it is deeper than the simple “let’s kill stuff together” approach.

Once you’ve formed your adventuring party, then you must give them a reason to stay together and journey onwards. If you went with the slow burn approach you may already have the reason to stick together, but if you went with the common conflict then once that conflict is gone they will have no reason to stick together. You can supplement this with more conflicts that lap over each other, but that’s really just putting a bandaid on a leaky pipe. Once the conflicts stop, your players will be left with a false sense of camaraderie. But if you can get your players to learn more about each other during the conflict, then perhaps a bond will form that can keep them together.

No matter which path you choose, make sure that in the end it is your players who choose. After all, this is a game based entirely on choices. If you take that from your players, then there won’t be much of a game left for them. So if they want to avoid the conflict set up before them, or ignore their family friend’s plead for help, then let them. You can always wing it and direct them back towards the group. Just have fun with it! A fantastic campaign starts with a fantastic game. And for that game and the many to follow, keep those dice rolling high!