You are here: Home / Adventures / One Shot: The Festival of Seasons

This is a short game designed for players of the first level. It is designed to be short enough to finish in one game session. The game’s setting fits with any fantasy game system, so feel free to use this module with any game system that it works with. I have purposefully left the stats open ended so that you can make it work with your game. This game is particularly good for newer players, as it covers most of the skills that they will need to learn to play. This one shot will end with a complete ending, but have a story hook in case you want to expand it to a full campaign. Now, let’s get on with the game! 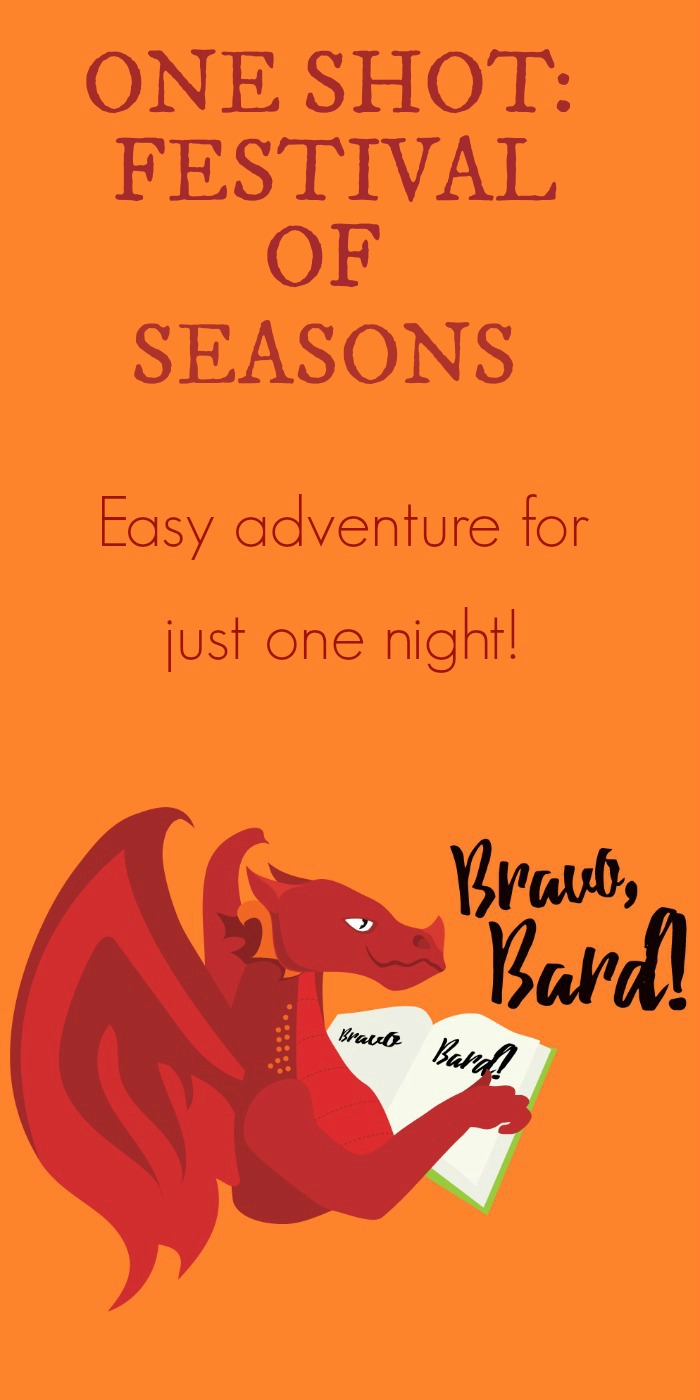 In this adventure players will attend a festival, having great fun with all of the villagers. But all is not what it seems. The town of Tritabu holds their festival in preparation for their great sacrifice to Seralise, the dragon. At the end of the festival a young child under the age of twelve is chosen, and then taken away by kobolds to Seralise. It is the players’ duty to bring back the child and break the cycle of enslavement to this dragon.

The town of Tritabu has stood for many generations. It seems whenever something comes along to threaten that, it disappears shortly after it arrives. Bandits arrive one day, then are never heard from the next. Natural disasters become small storms by the time they reach town. The town seems to have an air of protection about it, and outsiders of the town can’t seem to figure out why.

When the adventure begins, our players arrive at the town of Tribatu, where the Festival of Seasons is well under way. The festival celebrates the turning of the harsh summer season to the cooler season. Everybody is celebrating with smiles on their face as they drink with each other and play games. The players can join in on either of these festivities. The games available are:

Players can participate in any of these games. For prizes, you can reward them however you like. It can be gold, or it can be silly toys, or it can be something useful. Let the players play for as long as their attention holds, or as long as your play session allows. After they are done, the mayor of Tribatu shows up to make a speech about the past year, it’s hardships (which are few, have fun with these), and their dragon guardian Seralise, who the mayor will now begin to summon. A pillar of fire spews from the ground, creating a column of flames. In the flames players can make out the silhouette of a dragon, who begins to speak.

She asks for the sacrificial pool to be brought forward, and in response a group of seven young children walks forward slowly. At this point the villagers look nervous, some have tears in their eyes as they look upon the children. The dragon’s shadow studies the children for a few moments that feel like hours, then picks out the half-elven child from the group. A human woman and an elven man, the parents of the child, burst into tears. From the base of the pillar of flames, a troop of 3 kobolds come forward. They grab the girl and drag her into the flames. The dragon then thanks the town and wishes them another year of prosperity before the fire disappears in a puff of smoke, taking the kobolds and girl with it.

The crowd of people quickly disperses, leaving only the players and the parents in the area. The players can hear them talking to each other in between sobs. The mother grieving over the sudden loss of their only baby girl, and the father telling her that everything will be alright. He promises her this as he raises to his feet and begins a determined march out of town.

The players follow the father to a cave about two miles away from town. Bones are littered around the entrance, warning possible entrants of their fate. The players enter the cave, which snakes long into the mountain that it is carved in. They notice holes dug into the sides of the walls, just big enough for a small creature to fit in. Each hole has a 60% chance of holding a javelin. There are ten holes total. The players then continue to the end of the tunnel, where it opens up to a large room.

The floor has been rounded into a U shape, building up to ledges on the wall. On these ledges stand 10 kobolds, 5 on each side. There are also 2 large boulders on either ledge. If the players surprise the kobolds, they can get a chance to attack them before the party is seen. If the kobolds see the party first they will alarm each other and push the boulders so that they roll back and forth across the ground. The players must then fight the kobolds while dodging the boulders. The kobolds should have level 1 stats, and the boulders should be easy to dodge but do moderate damage if they are not.

Once the players defeat the kobolds, they can make their way into the dragon’s keep. Upon entering, the father will call out to his daughter and she will run to him, if he joined the party. If not, then the dragon can be seen singing a lullaby to the child, lulling her into a sleep. The players feel drowzy hearing the song as well, but there are no negative effects. The players notice that the red dragon looks very old. Her scales are chipped and broken in places where she’s been attacked, her red coloring has been dulled to a brick color, and the magic in the dragon’s eyes is barely noticeable.

The dragon doesn’t wish to fight, though she does express her displeasure at the party killing her servants. The players must try to convince the dragon to let the child go. This is hard to do as the dragon needs the life force of one child a year to live. The dragon wants to continue this existence because she wants to protect the town. Where other dragons will hoard gold or knowledge, this one believes life is the greatest treasure, so she hoards this town.  If the party can show the dragon that she is hurting the lives of those she’s sworn to protect, then the dragon will give up the child, and agree to stop asking for a sacrifice each year, even though this means death for her.

If the party succeeds, they will return to town and see the family reunited. They will receive a sapphire amulet for this deed. They can also share the news of their success with the mayor, who will grant them a heroic title which allows them to get any one item from a shop for free. After the adventure is complete everything wraps up pretty nicely. If the players wish to continue they can embark on a quest to save the dragon from death. This will require the party to search deep into life magic, as well as confronting more dragons for their knowledge. are your players up to the task? If so, then keep those dice rolling high!