You are here: Home / GM / How to Engage New Players

Over the course of my career as a GM, one of the most troublesome problems I’ve had to deal with is new players. The problem with these players is that they don’t quite understand what they can do in the realm of tabletop rpgs. They’re accustomed to the limits that other types of games place on them, even in open world sandbox games. Although video games have come a long way since their inception, they still can not match the infinite possibilities that the human mind can produce. Your new players will probably have experience with video games, so their mind has been taught to conform to the game’s limits. As a GM, it is your job to shake these preconceptions, and show your players the limitless possibilities that your game holds. Today we’ll be looking at how to do just that. 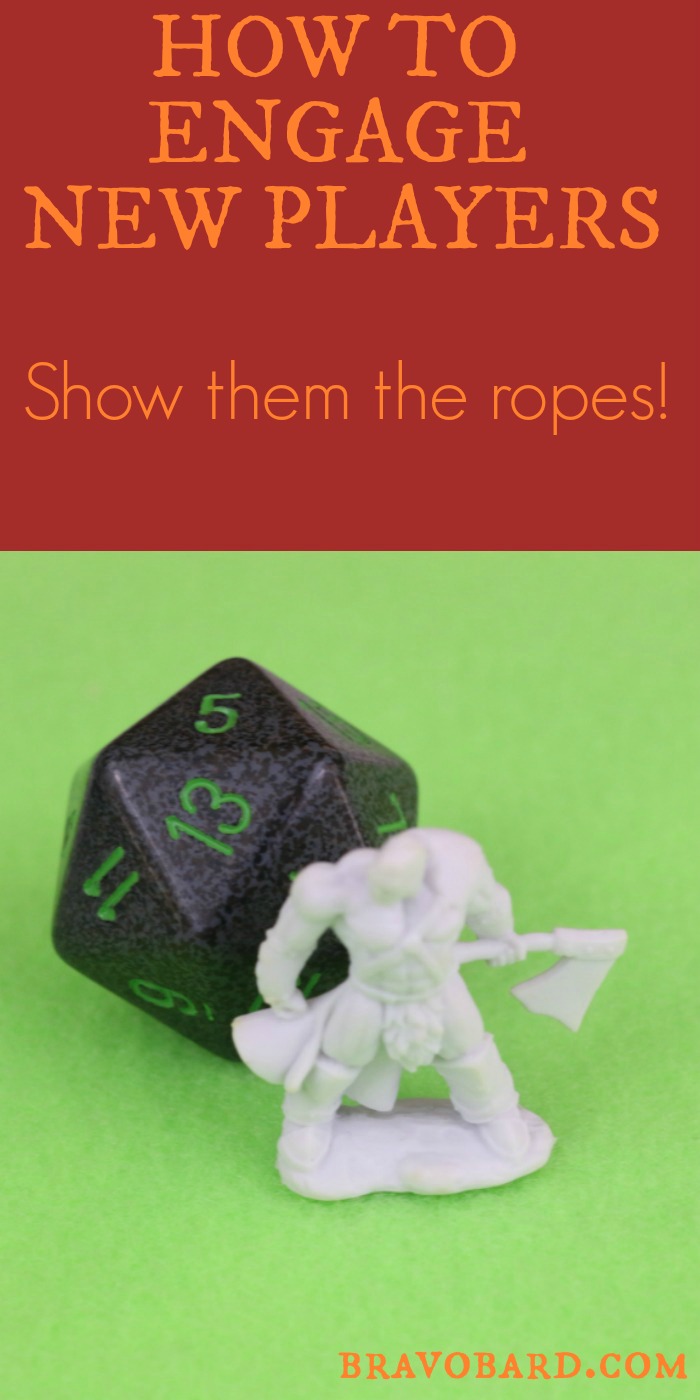 The easiest way to teach your players about what they can do is by simply telling them. As you’re helping them create their characters, go over aspects of the character sheet in detail. When your player picks a skill to become proficient in, start listing off the ways that skill can be used, both in combat and out. When they pick attacks and spells, offer up some ideas that they can use them for. Sometimes offensive abilities can be used for utility, or the other way around. Either way, this may not occur to your players, and a helpful reminder nudges them into thinking for themselves. Another great way of telling your players what they can do is by telling them what you’ve already done. By recounting your tales of heroics, you are inspiring your players to make stories of their own.

So what happens if you get to the table only to find that all of your words flew over their heads? If you ask them to take their turn and they give you a blank stare, you can give them a little nudge. Prompt them by asking what their character would want to do, where they would want to go, stuff like that. They might not have a handle on their character yet, so you can try being a bit more direct. Ask if they would like to follow a npc that just beckoned them, or if they’d like to chase after an enemy, or maybe they’d like to explore. Sometimes in order to get your players going with thoughts of their own, you must give them ideas that they think are their own.

If telling doesn’t work, then you must show. One my favorite method to do this is to introduce a teaching npc. This npc gets naturally inserted into the group, and from there you play him like a normal pc. By having an active example right there in game, your players can see in real time the possibilities of what they can do. You can have the npc ask a player for help to perform a task that they couldn’t perform by themselves, thereby actively engaging the player even more. Once the npc has served their purpose of teaching your players what they can do, you can remove him by showing what they can’t do. By removing your npc through a stupid mistake, you can give your players a final lesson that keeps them from becoming careless with their newfound freedom.

It’s very hard to break a new player out of their shell. It’s a problem that still gives me trouble to this day. The solution doesn’t take place over an evening of rolling dice; it’s a problem that takes time to fix. Using these methods along with a little patience will get your players through their baby steps into the world of tabletop rpgs. Once they’ve made the transition fully, you will have yourself a fine player to have fun and create stories with. Until next time, keep those dice rolling high!